The astronauts selected for the first human mission to Mars will need to have more than “the right stuff.” People on this very long mission will need to possess an eagerness for doing the right thing, too. Conscientiousness, defined as “wishing to do what is right, especially to do one’s work or duty well and thoroughly,” has emerged as the key trait requirement for astronauts that will live and work on the surface of Mars millions of miles from Earth, according to a new study. This trait was identified as more important than honesty, humility, emotionality, extroversion, openness, and agreeableness. “Conscientiousness, an individual personality trait, can be thought of as a pooled team-resource,” said Julia McMenamin, the study’s first author and a doctoral student in psychology at Western University in Canada, in a statement. “The more conscientiousness a team is, the better they will likely be at accomplishing tasks.”

The study published last week in the journal Astrobiology. Conversely, traits like “social loafing,” or the habit of a team member putting in less effort than when they work solo, are undesirable in a potential Marstronaut. Traits that seem counterproductive and negative behaviors are likely to cause more trouble and disruptions in a team environment. The researchers consider these traits and behavior “non-negotiable” for long-duration spaceflight crews. 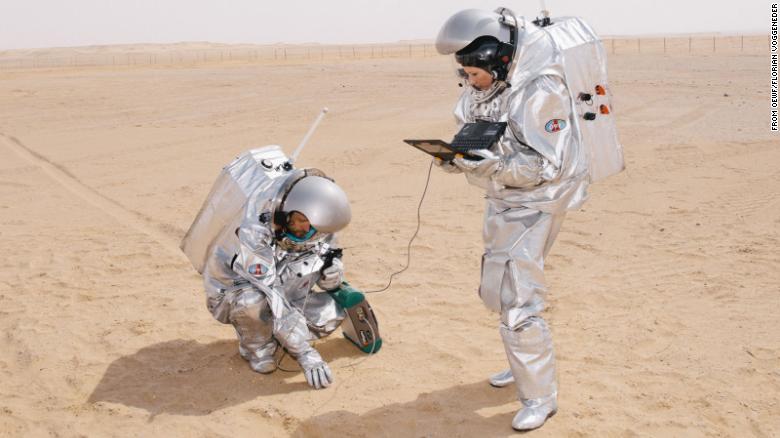 Analog astronauts Iñigo Muñoz Elorza and Carmen Köhler perform an experiment during the 2018 mission in Oman. A careful focus on crew selection, emphasizing effective communication and very detailed work and planning processes, could help avoid any negative factors. Some of the same things identified in the study could be used to help people coping with isolation during the pandemic as well.

Simulating a mission to Mars

Currently, NASA is targeting the 2030s for the first human mission to Mars. Depending on the alignment of Mars and Earth for launch and landing and the duration of the mission on the Martian surface, this crew could spend five years together — not including training together beforehand. To test what this crew dynamic might be like ahead of a real mission, researchers studied a team of five “astronauts” during an exercise analogous to a Mars mission. This event was hosted by the Austrian Space Forum in Oman in 2018. The Dhofar region of Oman is a good analog for the Martian environment in terms of isolation and extreme conditions. McMenamin was joined by Natalie Allen, a professor of psychology at Western University, and Ottawa-based space exploration company Mission Control Space Services Chief Science Officer Melissa Battler for the study.

The AMADEE-18 analog space mission lasted for four weeks. Five astronauts, including four men and one woman between the ages of 28 to 38, lived in a simulated Mars environment. Before, during, and after the mission, the astronauts filled out surveys addressing the performance of their team and any team conflicts as well as their stress levels. At the end of the mission, the astronauts rated themselves and each teammate. They also answered questions about their behavior in their respective roles and identified any counterproductive behaviors, including social loafing.

This particular team worked well together as a team, but the researchers were not surprised because they had prepared for their “mission.” The team was also supported by field and mission control teams. The team members were also familiar with each other before the mission began. All of these factors can be identified in examples of positive teamwork on Earth, the researchers said.

“How familiar team members are with one another has been shown to help teams work better together likely because it provides team members with knowledge about each other and helps them communicate better and more efficiently,” McMenamin said.

Stress is a common negative factor that can influence team performance on Earth and in space. It’s distracting, increases anxiety, causes cooperative difficulty, increases task overload, and contributes to destructive emotions. “Anyone who has worked on a team knows conflict amongst team members can harm team performance and make for a negative experience. When people argue about how to get things done or get into personal disagreements, there is less time and energy left for completing tasks,” McMenamin said. “What’s interesting is that there are different types of conflict, and so long as interpersonal issues and arguments about how to go about accomplishing tasks are avoided, differences in views and opinions might actually improve team performance likely because this allows for the team to benefit from each member’s knowledge and perspective.”

Given that this particular analog mission only lasted for about a month, the researchers are interested to know how things might play out over the course of a long-duration mission. “Major issues caused by psychological distress and interpersonal problems don’t tend to show up until months or even years spent in an isolated, confined, and extreme environment, which highlights the need for longer-duration simulations,” McMenamin said.

Being a good team player has almost always been part of the astronaut playbook, going back to the days of the Apollo missions. Former NASA astronaut Mike Massimino spoke to CNN in September about the Netflix series “Away,” which focuses on an international crew leading the first human mission to Mars. Massimino served as a consultant for the show. The show crew was most interested in hearing about the human side of being an astronaut, Massimino said. For example, they asked him about the emotional aspects of leaving your family behind on Earth, the camaraderie between the crew, and “what it’s like in your heart and soul, rather than the process,” he said. Massimino, who flew on multiple missions during the Shuttle era, told them that “the Earth looks like heaven. It makes you realize we’re so lucky to be here.” 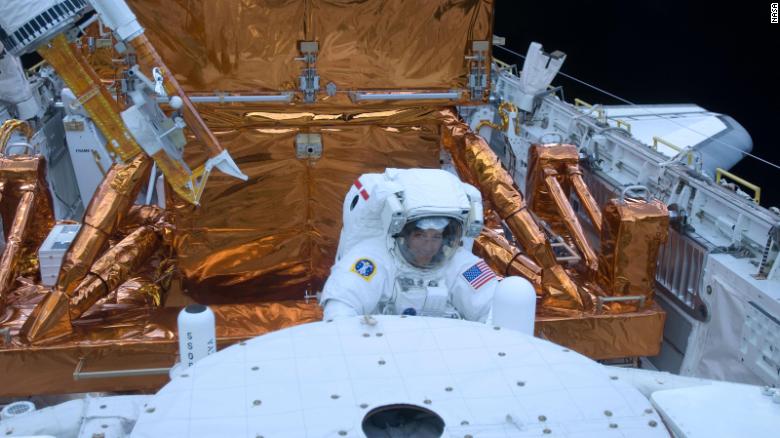 STS-125 Mission Specialist Mike Massimino is pictured here working with the Hubble Space Telescope in the cargo bay of the Earth-orbiting space shuttle Atlantis in 2009. Regarding the teamwork aspect of spaceflight, “we really do love each other as astronauts,” Massimino said. “It’s like a hybrid between a family member and a friend. You really do care about each other. And there were seven of us on the Shuttle crew. We became like a family, having all of these experiences in training and spaceflight. They’re extraordinary and there is not anything I wouldn’t do for these people.”Massimino was selected to be an astronaut in 1996. When asked about the traits that would be important for astronauts going to Mars, he said he feels that the selection process would be similar to the way NASA chooses astronaut candidates now for long-term spaceflight on the International Space Station.

“We’re looking for people who would be good candidates for long-duration spaceflight that get along, personalities that would let things roll. If things go wrong, you make mistakes because you’re not perfect, you need to be able to roll with it. They should be able to contribute and be a good positive crew member, not only for their crewmates, but the people helping them back on Earth.”One of the most important aspects that helps the crew’s morale and performance is a connection to Earth and the people they care about on it — something that will be increasingly more difficult as a spacecraft leaves Earth for Mars, causing communication delays. People tend to think of astronauts as superheroes, Massimino said. “But we’re really just regular people who care about each other and have really awesome jobs.”